– a puppetry stand up show –

One after the other, the cliches of puppet theatre, the values of tradition in art, the principles of dramaturgy and one banana as well, are put to be executed up against the wall.

The performer wishes to tell the classical tragedy of king Oidipus, but it seems that memory is not that good as it used to be, and the materials and puppets have their own stories to tell. The spoken text and the taken actions are in a constant dissonance… 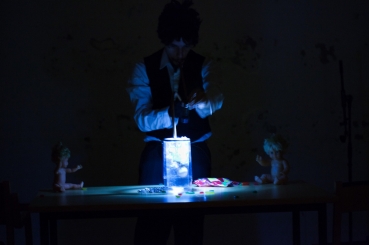 Ishmael Falke translated this classical masterpiece from ancient Greek language and performs it. The show was performed in clubs and pubs as well as in many performing arts events beginning from 2006.