A stand up duetto for a puppeteer & a national symbol

After a hundred years of faithful service, the Finnish lion – the coat of arms of the state of Finland –  opens his mouth and finally speaks! The Unknown Lion (Tuntematon leijona) is an outspoken puppet stand up show that difuses the explosives called Finnishness and immigration, and puts prejudices against the wall. Laughter is the best weapon against them. 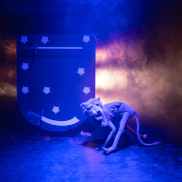 The Finnish lion lives in a constant contradiction: He is a wild animal, but he is also a key cultural figure; he is accustomed to a large territory, but he has to settle for a polished coat of arms today. Besides, he wants to go back to his warm homeland – but there he would be nothing but a small lion in the huge, lion-filled savannah. In Finland, he is, in fact, the Finnish lion, one and only. How to live with this contradictive identity?

The unknown lion is a taking a hilarious stand in support of a different, original, Finnish lion. Because the Finnish lion – no matter how much some try to twist the facts around – is an immigrant.

The performance premiere on the 27th April 2018 in Tehdas Teatteri, Turku. Following high demand, more shows are coming up in February 2019 in the Turku City Theatre.